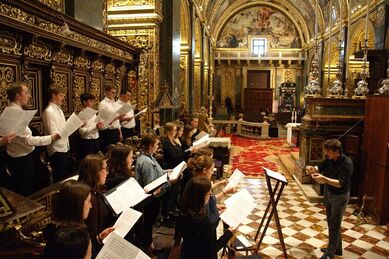 Having sung choral evensong in Canterbury Cathedral the night before, the choir reconvened on Saturday evening at Luton Airport for an evening flight to Malta.  A series of delays at Luton meant we did not get to bed in our hotel in Sliema much before 2am.  After just a few hours of rest, we were on the go again.  A ferry took us across the harbour to Malta’s capital, Valletta, where we would sing two Sunday masses.  The first took place at St Paul’s Pro-Cathedral where we were treated to a wine reception after the morning service, hosted by the Chancellor, the Reverend Canon Simon Godfrey.  His house, built along the side of the Cathedral, boasted stunning views over the Grand Harbour and the Grand Master’s Palace in the distance.  The choir dispersed to explore the ancient city of Valletta before meeting outside St John’s Co-Cathedral in the late afternoon sun, ice creams in hand.  This was a stunning venue in which to sing our second service.  Built in the late sixteenth century and redecorated in the seventeenth century, it is now considered one of the best examples of high Baroque architecture in Europe.  The sheer size of the building is impressive alone but the amount of ornate gilding and marble inside was staggering.  The choir’s dressing room even had its own Caravaggio on the wall.  The barrel vaulted ceiling in the Cathedral created a vast acoustic, causing the ‘Alleluias’ at the end of Bairstow’s Let all mortal flesh keep silence to ring out for seconds.  Christopher Tye’s richly scored Mass Euge Bone and John Taverner’s Dum Transisset Sabbatum were beautifully sung and created a magical atmosphere at the evening mass, rather shocking the congregation of local worshippers who were expecting a 20 minute said-mass.  Exhausted after a very long day and having slept very little the night before, we all staggered into the nearest restaurant for local specialities such as the local octopus stew and an aperol spritz.
Monday was a free day for the choir and many of us traveled to Mdina, a fortified city towards the North of the island.  It was a warm and sunny day, perfect for exploring the silent and empty medieval streets of the former Maltese capital.  On our return to Sliema, some of the more adventurous members of the choir went to the beach where they found the sea to be just a little bit cold!  Later that evening we were all invited to a reception hosted at the house of the Maestro di Cappella, Hamish Dustagheer, who lived a few streets from our hotel.
After a lie-in on Tuesday morning, we left the hotel for a boat tour of the various harbours and inlets around Valletta.  It was decidedly cold and grey and the tea served on bored left quite a lot to be desired.  A brief lunch was followed by a rehearsal for our evening concert at the beautiful and intimate Our Lady of Victories Chapel.  The concert was sold out and the choir received tremendous praise from the audience at the end.  It was a very special evening, followed by a celebratory dinner in a nearby restaurant where we concluded by singing our encore for fellow diners, Stephen Paulus’ The Road Home.  Even the restaurant had a generous acoustic! ​