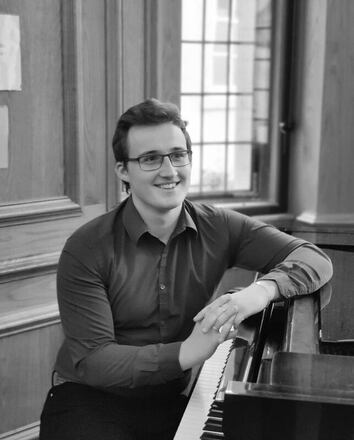 Matthew is a second-year music undergraduate and organ scholar at Lincoln College Oxford, where he trains, conducts and accompanies the choir in services and concerts.

Matthew began his musical career in 2008 as a chorister at Chelmsford Cathedral. In 2016, he was offered an organ scholarship at St Mary's Church, Maldon. Upon this appointment, he began studying the organ under the tutelage of Laurence Lyndon-Jones, Assistant Director of Music at Chelmsford Cathedral, whilst continuing to study piano with Tim Carey. During his time at St Mary's, Matthew played for a variety of services and concerts in Chelmsford, Newcastle, Peterborough, Carlisle and Coventry Cathedrals, and abroad in Bavaria and Ghent. After completing his A-levels, he took up the position of Organ Scholar at St Edmundsbury Cathedral, and taught A-level music at King Edward VI School. After his first school term, Matthew became Acting Assistant Organist at the cathedral. During the pandemic, Matthew helped provide a wealth of free online theory tuition, educational resources, singing and piano lessons, virtual rehearsals, performances, concerts, and services, to ensure people still had access to music, education, and worship.

Matthew is also an accomplished saxophonist and enjoys other hobbies such as parkour, ice hockey, gymnastics coaching, photography, driving, and working on his car.