​In July 2015, Lincoln College Chapel Choir travelled to the south west of England to take part in the Taunton Live festival as the festival’s choir in residence.
Our tour started with evensong at Bristol Cathedral, where we welcomed our deps and had our first rehearsal. Parsons’s Ave Maria was sung beautifully by the choir, while senior organ scholar Marion Bettsworth particularly enjoyed her time in the organ loft, especially during Stanford’s Magnificat and Nunc Dimittis in A. Sadly there was no time to enjoy the spectacular architecture of the cathedral. As soon as we were finished, we hot-footed it through Bristol’s funfair (pausing only to purchase a small, inflatable iguanadon, Brino) to take a coach to Taunton.

The following day, Sunday, was a busy day! After a quick breakfast, we made our way to the church of St Mary Magdalene for the church’s patronal festival and the launch of the festival. LCCC wowed the congregation with a performance of Weelkes’s Hosanna to the Son of David and then joined forces with the church’s own choir to sing Finzi’s God is gone up, the first piece of Finzi in a week that may justly be described as a Finzi-fest. We were provided with a delicious bring-and-share lunch at the church, after which we headed over to St John the Evangelist’s church for choral evensong. Senior Organ Scholar Marion Bettsworth conducted the choir in a nostalgic performance of Sumsion’s Magnificat and Nunc Dimittis in A and a spritely romp through Byrd’s Haec Dies, while Chapel Precentor Joe Mason enjoyed playing Bach’s Prelude and Fugue in G on the church’s fine Father Willis organ. Once again we were treated to delicious food provided by the church, leaving us well-fed and contented—something that would became a theme for the week. The day was rounded off with a rehearsal of music for the coming week and an exploration of the grounds of King’s College Taunton, our accommodation for the week. 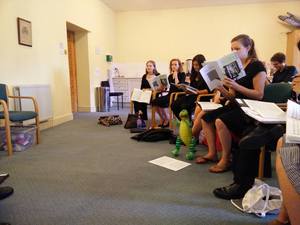 ​Monday was a far quieter day. Many choir members took the opportunity of a morning off to explore Taunton and its many tea rooms. In the afternoon we rehearsed with the winner of the festival’s conducting competition in advance of our performance of Finzi’s God is gone up that evening. We were treated to spectacular performances by Orchestra West and Margaret Phillips in the concert, alongside whom we were performing.

On Tuesday we sang our third evensong in nearly as many days, this time at Holy Trinity Church. Once again we were treated to a delicious tea by our hosts. Straight after evensong, we were off for a rehearsal at St Mary Magdalene and then were in the audience (for once!) at a concert in which Senior Organ Scholar Marion Bettsworth played Finzi’s Eclogue in spectacular fashion with Orchestra West. All this singing did nothing to deter some choir members from enjoying local sport, though—several singers, accompanied by tour mascot Brino, managed to make it to the Women’s Ashes in Taunton!

The choir’s main activity on Wednesday was singing in a coffee concert at the Castle Hotel. The choir sang a selection of Finzi’s Seven Poems of Robert Bridges, madrigals and folksong arrangements, interspersed with instrumental performances of Doppler’s Andante and Rondo (Marion Bettsworth, Thomas Galea and Joe Mason) and Saint-Saëns’s Tarantelle (Thomas Galea, Rachel Sears and Marian Bettsworth), all received very warmly by the full-house audience. We took advantage of a free afternoon to enjoy afternoon tea and play a game of rounders in the park. That evening, we were treated to a wonderful barbecue in the picturesque Pitminster with the cast of the festival opera, Acis and Galatea. 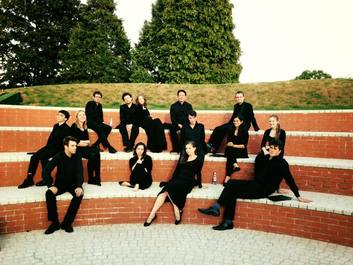 Despite it being our last day, there was still plenty of singing to do! After a free morning, we travelled to Wells Cathedral for evensong, which was to be Senior Organ Scholar Marion Bettworth’s last evensong with LCCC. True to form, she conducted Howells’s Hymn to St Cecilia with great feeling and musicianship, while Chapel Precentor Joe Mason got slightly too excited at the range of reed stops on the cathedral’s four-manual Harrison and Harrison organ. No time to enjoy beautiful Wells, though: we were straight back on the coach to perform in a spectacular garden concert. Standing on a small hillock and singing across an ornamental pond to our appreciative audience, we could hardly have asked for a more picturesque or memorable end to our tour.

Our thanks must go to the clergy and chapters of Bristol and Wells cathedrals, the clergy of St Mary Magdalene, St John the Evangelist and Holy Trinity churches in Taunton and King’s College, Taunton for their kind hospitality to us throughout the week. In particular, we are grateful to Brian Cresswell for his splendid organisation of our week, and for approaching us to invite us to be choir in residence at the festival. The tour was a terrific success, and we look forward to a continuing relationship with the south west of England.