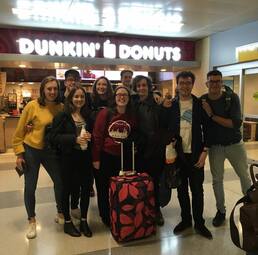 Embarking on our biggest tour in recent years, members of Lincoln College Chapel Choir arrived bright and early at Heathrow Airport on April 9th for a flight to New York’s JFK Airport.  With members of the group traveling on two different outbound flights, we regrouped in the arrivals area several hours later with only one member having been interrogated by US Homeland Security.  Our bus transfer was waiting for us and soon we were driving up the coast to our first destination, Greenwich CT.  Choir families and other members of the church acted as hosts and we were all soon on our way to different houses for a relaxing first night.
On Wednesday morning we were all back at the church, a little the worse for wear, for our first general rehearsal.  The church’s music department kindly provided cookies and coffee for the break midway through and this combination worked well at counteracting the jet-lag.  The afternoon was free, some chose to lie low in Greenwich whilst others took the train into New York City.  Back at Christchurch in the evening, we rehearsed Elgar’s Spirit of the Lord with the boy and girl choristers of the church and were fed before our first concert.  The church was full and our concert was received with a standing ovation at the end.
Another bus transfer the following morning took us to Boston in time for lunch and some free time exploring Cambridge and Harvard.  After our brief rehearsal in the St Paul’s Church in Harvard Square, Organ Scholar William Parkinson, Chaplain Melanie Marshall and Music Fellow Fabio Morabito attended a reception for Lincoln College alumni in a bar just around the corner from our concert venue.  We were thrilled that so many Lincoln alumni who are now based in the New England area were able to come and be part of the audience for the concert that night.  St Paul’s Church boasts a wonderful acoustic due to the amount of marble inside and its vaulted ceiling.  The last item on the program, Parry’s sublime setting of Lord let me know mine end, floated through the building, creating a wonderful effect.  Many members of the choir were fortunate enough to stay with Lincoln alumni who hosted us.  One of these alumni, Willa Brown, led a super tour of historic Boston the next morning on our day off.  Braving the bracing Atlantic wind, we followed the Freedom Trail through central Boston, seeing some of the most significant sites where the fight for independence took place.
The complete day off was rewarding after the traveling and two concerts of the previous days and allowed us to recuperate ahead of a manic weekend of singing.  Leaving Boston behind us on Saturday morning, our coach took us West to Albany NY.  We arrived at lunch and sought out the closest diners for an authentic American experience.  Our concert was in the afternoon at St Peter’s Church, State Street.  Once again we sang to a packed church and our program which included the entire Byrd Mass for Five Voices was a huge success.  We were housed by choir families at The Cathedral of All Saints where we sang two services on Palm Sunday together with The Cathedral Choir of Men and Boys.  It was an incredibly long day with a lot of singing but it was a wonderful experience to sing with another choir and experience the start of Holy Week in a large Episcopal cathedral.
Our final transfer took us by train down the scenic Hudson valley early on Monday morning to New York City.  Arriving mid-morning, we immediately dispersed to explore the wonders of the ‘Big Apple’.  Our final engagement of the tour involved us singing at a reception for Lincoln alumni hosted by the Rector in the Cornell Club.  Like in Boston, there were many alumni present who then hosted us for our two nights in New York before we flew home.  The tour was a huge success and it was lovely to sing in so many different places, with different choirs, and to meet and entertain many of our alumni.